August is normally one of the hottest months in Hong Kong. It was reported that August 2009 was the hottest August in more than 30 years with temperature reaching 33°C for 10 consecutive days in the month. The map shows the distribution of mean daily outdoor temperature for the month of August in 2000 (a) and 2009 (b). In comparison, it can be seen clearly that the overall mean temperature has increased. This is more obvious in urban areas on Hong Kong Island, and the new towns of Shatin, Tai Po Tsuen Wan. The temperature readings were obtained from the various weather stations distributing throughout Hong Kong (in red), operating under the auspices of the Hong Kong Observatory. The readings at the different stations have been interpolated to cover the whole of Hong Kong.

Extreme temperature can be detrimental to human health. Heat stroke and heat exhaustion are two medical conditions which can lead to death, if one is exposed to extreme heat without protection. Some diseases, notably skin conditions, are precipitated by hot weather or exposure to UV light. Hot weather may also affect the habitat of insects, the distribution of which can affect the transmission of infection, like dengue fever. On a broader scope, ecologic change accompanying global warming is also an emerging health problem. In the last 50 years, global average surface temperature has risen by 0.65°C. Abnormally high temperature in the summer of 2003 was associated with 35000 more deaths in Europe than in the other years. The extreme temperature can affect the production of staple food, increasing the risks of malnutrition. 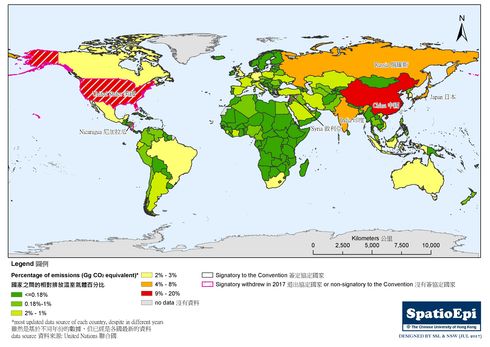 No more than 2°C
不超過兩度