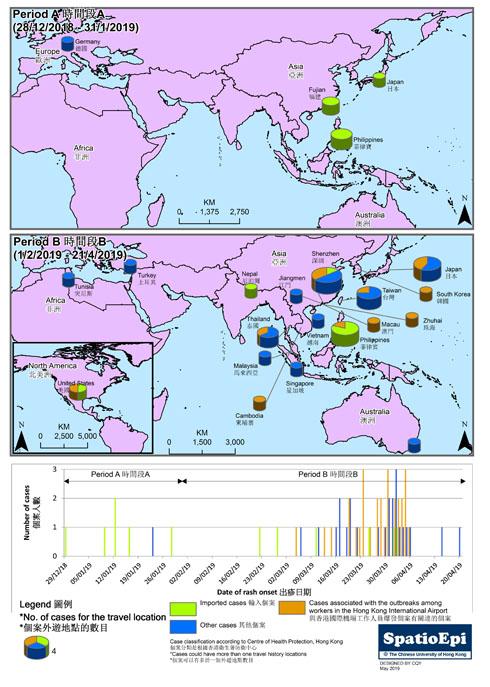 ©2019 SpatioEpi.com
Data source: Data for the map were obtained from the Centre for Health Protection, Department of Health, Hong Kong.
Map created by CUHK SpatioEpi Group

According to the Centre for Health Protection of Hong Kong Government's Department of Health, 66 measles cases had been reported between January and April 2019. Among the reported cases, 13 were classified as imported, while 29 were associated with an outbreak among workers at the Hong Kong International Airport (HKIA).

The maps show the distribution of travel locations of reported cases during their incubation period. Before HKIA outbreak (upper map), most of the reported cases had visited places where there were measles outbreaks, such as Japan and the Philippines. During HKIA outbreak, a majority of the associated cases gave a history of travel to Japan or Mainland China (lower map). A large proportion of the imported cases during this period had traveled to the Philippines. Most of the non-import and non-HKIA cases classified as "others" did not have travel history.

Measles is a highly contagious disease. Transmission of measles virus could occur when a non-immune person is exposed to an infected person, which may happen when an outbreak occurs, either during travel or in Hong Kong. Vaccination is currently the best means of protection from infection.

Data for the map were obtained from the Centre for Health Protection, Department of Health, Hong Kong.

What is measles? 什麼是麻疹?
Measles is a highly infectious disease caused by Measles virus. Incubation period usually ranges from 7 to 18 days.
Affected persons present initially with cold-like symptoms, such as runny nose, sneezing and cough. Other early symptoms include fever, sore and red eyes and small greyish-white spots in the mouths. These are followed 3 to 7 days later by red-brown blotchy rash, which usually spreads from the head or upper neck to the rest of the body.
The infection usually clears in around 7 to 10 days, and lifelong immunity will be developed. Serious complications like pneumonia and encephalitis do occur, and could cause death especially in children under the age of 5.
麻疹是由麻疹病毒引致的疾病，具高度傳染性，潛伏期一般為7至18天。
患者初時會有與傷風相似的病徵，如流鼻水、打噴嚏及咳嗽，其他感染初發病徵則有發燒、眼紅眼痛及口腔內出現白點。3至7 天後皮膚會出現污斑紅疹，通常由頭部或上頸擴散到全身。
大部分患者可於7至10天內自行痊癒，並有終身的免疫力。麻疹會引起肺炎及腦炎等併發症，對五歲以下兒童構成嚴重威脅，可以導致死亡。

How does it spread? 如何傳播?
Measles virus can be spread by droplets that come out of the nose and mouth from an infected person during coughing or sneezing. The virus can also be transmitted by direct contact with nasal or throat secretions of infected persons, or articles soiled with nasal or throat secretions. An infected person can be infectious from the time of symptoms development until about four days after appearance of the rash.
麻疹病毒可經患者打噴嚏或咳嗽時所噴出的飛沫傳播，直接接觸病人的鼻喉分泌物或被鼻喉分泌物污染的物件亦可傳播麻疹病毒。麻疹患者自出現病徵到出疹後四天內均可把病毒傳染他人。

Vaccine? Prevention? 如何預防?
There is no specific treatment for measles, but vaccination is effective to prevent the disease. Measles, mumps and rubella (MMR) vaccine can be administered by injection for immunisation against measles. Children should follow the recommended schedule of local childhood immunisation programme for vaccination.
現時並沒有特效藥物治療麻疹，但接種疫苗可有效預防此病。現時麻疹的免疫接種主要是注射麻疹、流行性腮腺炎及德國麻疹混合疫苗，兒童應根據當地的免疫接種計劃的時間表接種疫苗。 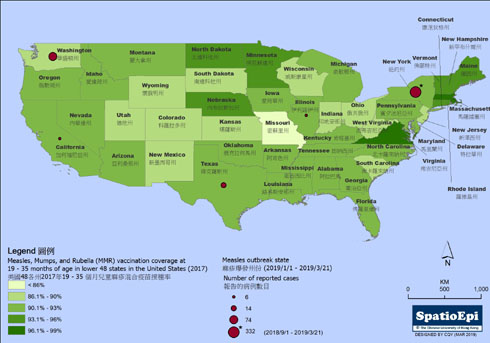 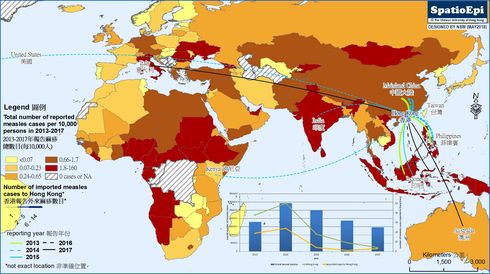 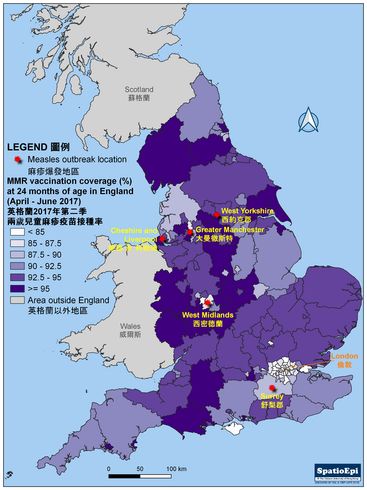