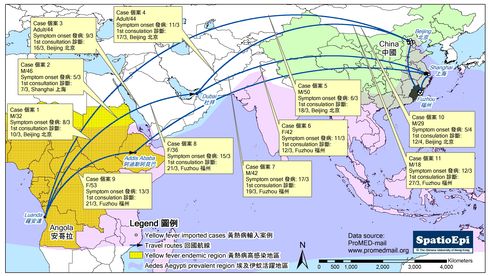 Yellow fever is a fatal mosquito-borne disease prevalent in tropical and sub-tropical Africa and South America. The causative virus is transmitted primarily by Aedes aegypti, a type of mosquitoes with widespread distribution in the world. Since December 2015, Angola started to have massive yellow fever outbreaks. Due to the close economic relationship between China and Angola, many Chinese workers and businessmen are staying in Angola. If unvaccinated, they may be infected and could bring yellow fever virus back to China when travelling home. As majority of people in China are not protected against yellow fever, the virus would spread easily in mosquito-breeding season and cause outbreaks.

The map shows 11 yellow fever cases in China imported from Luanda, capital of Angola, during 13 March to 24 April 2016. Five cases were imported to Beijing and Fuzhou respectively and one case to Shanghai. The Embassy of China in Angola had expressed that at least 6 Chinese workers in Angola were suspected to have died from yellow fever. Yellow fever is a vaccine-preventable disease. For personal and community health, people who wish to travel to endemic areas in tropical Africa and America should receive yellow fever vaccine 11 days before arrival.

Data for this map were derived from statistics from ProMED-mail.

Note: Case 6 was vaccinated before symptom onset but had probably been infected already prior to vaccination.

What is yellow fever? 什麼是黃熱病

How does it spread? 如何傳播? 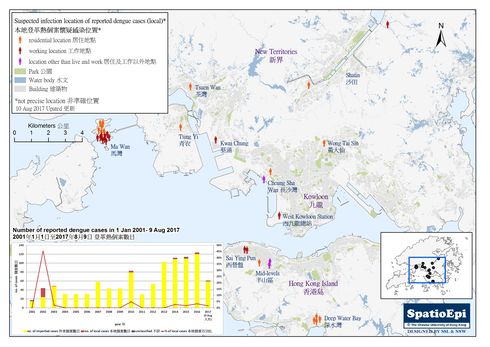 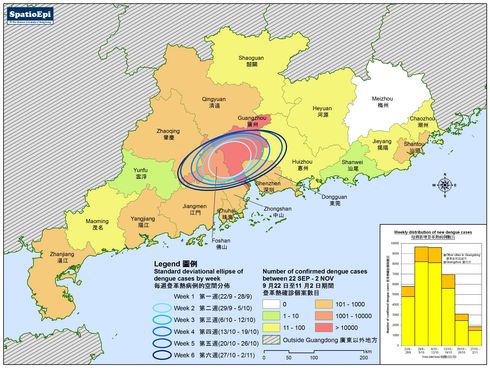 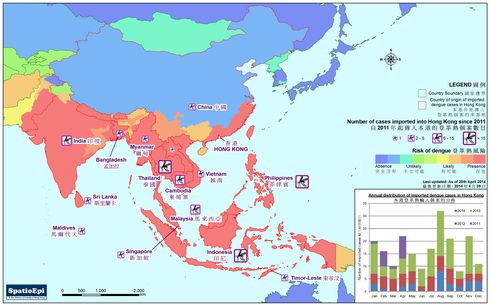