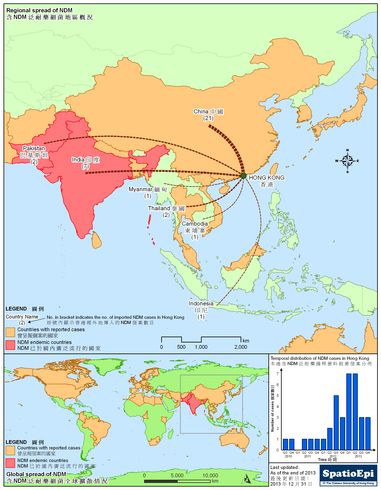 New Delhi metallo-beta-lactamase (NDM) was first detected in a bacterial isolate in 2008 from a Swedish patient who had been admitted to a hospital in India. By the end of 2013, NDM have been identified in over 50 countries.

In Hong Kong, there were a total of 36 reported cases of NDM bacteria. The number of cases increased significantly in the past two years. The map shows the epidemiological links of the reported cases in Hong Kong, most of which had travel or healthcare history elsewhere in Asia. Seven patients had travelled to India whereas the majority (21/36; 58.3%) were associated with living or being hospitalized in Mainland China. Apparently, acquisition of bacteria with NDM strains was no longer limited to the Indian subcontinent.

Data for the map were obtained from Centre for Health Protection, Department of Health, Hong Kong and published scientific literature.

New Delhi metallo-beta-lactamase (NDM) is an enzyme, which can make bacteria resistant to a range of beta-lactum antibiotics, including penicillin derivatives and carbapenems. Infections with bacteria harbouring NDM gene are often more difficult to be treated because of limited therapeutic options and severe clinical infections.

A patient infected with bacteria harbouring NDM gene could be asymptomatic, but may also develop life-threatening disease, depending on the organ/system affected and one's general health. To prevent the emergence and cross-transmission of NDM strains, proper use of antibiotics and personal hygiene is of utmost importance.