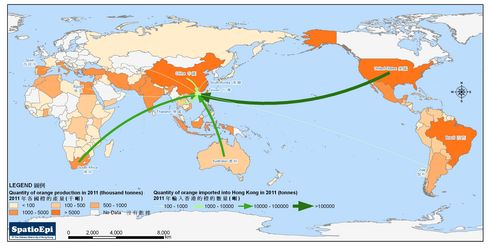 A territory-wide survey in 2005-2007 revealed that orange is the most popular fruit consumed by people in Hong Kong. On average, 55.5 grams of orange (about one eighth of the recommended daily servings for fruits and vegetables) are consumed per person per day. Oranges are rich sources of antioxidants and dietary fibre, which are both important for maintaining health.

In 2011, more than 200,000 tonnes of oranges were imported to Hong Kong, which was the second largest orange importing country in Asia. The map shows the distribution of orange production in the world as well as the flow of oranges into Hong Kong in 2011. As depicted by graduated colours, Brazil, the United States and China were top three producing countries of oranges. Arrows indicate that most of the oranges in Hong Kong were imported from the United States, followed by South Africa and Australia.

Data for the map were obtained from Food and Agriculture Organization of the United Nations.

Fruits and vegetables provide us with a good variety of vitamins and minerals as well as dietary fibre. Some studies suggested that consuming adequate amount of fruits and vegetables daily can help to reduce the risk of some chronic conditions like cardiovascular disease, stroke and certain cancer.

In Hong Kong, the Government’s Department of Heath recommends two servings of fruits and three servings of vegetables daily. The actual quantity depends on age, sex and amount of physical activity.

Like any other healthy food, however, fruits and vegetables are not advised to be taken excessively, especially for those who are suffering from diabetes, renal diseases or during pregnancy. 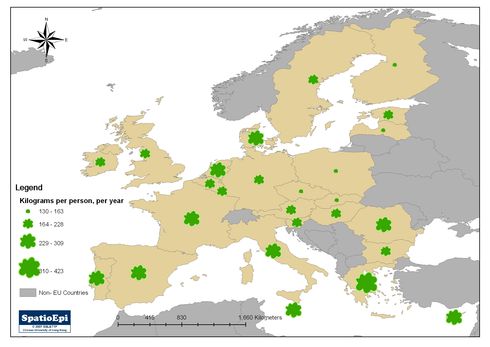